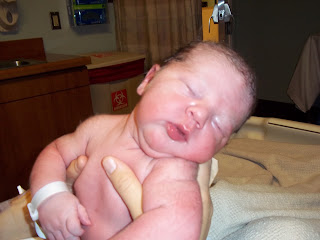 As promised, here’s the update on our new little addition!
My November 18th due date came and went and it was quite clear our third baby had no interest in coming on time. In fact, I think he may have gotten hold of some super glue because the kid was snug as could be. The midwife had been monitoring his size due to the fact that my belly was big enough for twins. In fact I got asked ALL THE TIME if I was having twins. In one night two people asked me if I was having twins and a third lady said my belly looked just like hers. I thought, finally, someone who had a belly as big as mine. Then she said, “I was carrying twins.”

Fabulous. Time to go home to hubby and consider picking a back up name!

Needless to say we were concerned about this baby coming late and getting ANY bigger. So aside from all the old-fashioned remedies for encouraging labor to begin, I decided to google it and see if I had missed an idea. A youtube video of a mego prego lady rocking out to music in her living room immediately caught my attention. I mean the lady was really getting down with her bad self. So on Saturday I decided to give it a try. Of course my husband whipped out his I Phone and lets just say if the footage was not properly deleted his life may be in jeopardy.

Although I did decide there were 4 good things about being overdue:
1. No one will try and kidnap you. It’s just too much work. Plus you have the whole bladder control thing playing to your advantage.
2. You can walk through Costco devouring an almond ice cream bar and no one will bat an eyelash. Except for the man who gave you the odd look when you took off the wrapper as you rather (indiscreetly) sang hallelujah to your about-to-be-consumed-dessert.
3. It’s most likely the only time that someone will tell you your belly is hard as a rock.
4. Even though you have kankles…you can’t see them *grin*

Anywho, back to the action.

On Saturday night, to my surprise it kept the momentum of my contractions going. Since we live an hour+ from the hospital, I woke up my husband, Noah, and he got to work throwing on clothes, loading bags and warming up the car.

When we got to the hospital it was 2:00 AM and the labor and delivery floor was under construction. We walked the halls for an hour watching the commotion to keep my mind off things. When faced with the uphill climb of labor and pain, a gal can get overwhelmed. When anxiety and doubt crept in, I asked Noah to read to me. He pulled out his phone and Bible app then read all of first Timothy. Later on, after officially checking in, things really intensified and he rounded the corner into 2nd Timothy because still, it was keeping me semi-calm. This is a good time to point out that we had chosen the name Caleb Scott for our little man. The day before I went into labor, Noah suggested the middle name Timothy. We decided to wait and see when he was born and we could decide. More on that in a minute…

To our delight, Caleb was born at 12:02, a surprising 9Lb 15 oz, and the whole labor experience worked out really well. I was so thankful for my husband, especially when it came down to the idea of changing our original birth plan and veering in a different direction. The whole time Noah was my hero and I was so thankful to have him by my side. We named our new son Caleb Scott then shortly after, I asked Noah if we could change it to Caleb Timothy due to the fact that we had nearly consumed both books only hours before. Since his idea the day before, he was pretty thrilled and it suddenly became clear that was the perfect middle name.

Our ten pound baby was quite a hit on the labor and delivery floor that night, as nurses came and went, amazed at his heft each time they picked him up. He’s just a warm, snuggly, teddybear and I have to admit it’s not always easy to share him :). 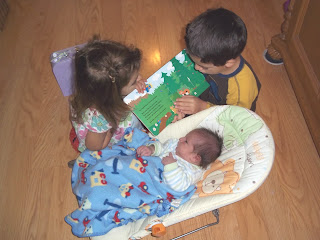 We were so excited to have the kids come see him the day after he was born and even more excited to finally bring him home. He likes his snug little house in the mountains and loves even more having his diapers changed near the wood burning stove and two doting siblings singing to him, reading to him, and just loving him endlessly. Our family feels so much more complete now and my husband and I are excited to watch Caleb, Levi and Mabry continue to grow into the lovely people God has planned for them to be.