The Moment I Forgot About Christmas 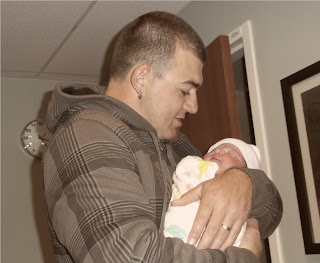 It’s been more than forty-eight hours now since my husband came home from work early in excruciating pain. More than forty-eight hours since I called his mom to see if she could rush him to the ER. I watched in near tears as our neighbor, who is a nurse, brought him a face mask to put on because if her fears were correct, he could have been so contagious that our whole family would be at risk.

I didn’t know anything. I simply knew that he was so weak he could hardly stand. And watching him leave with no color in his face and tears in his eyes for fear the baby or the kids would get whatever it was that he had, simply broke my heart.

Watching them drive away was almost too much to bear. I wanted so desperately to go with them. But we all knew that taking a four week old into the ER was not a good idea. So I stayed home and waited.

There were a few things I knew. I knew he was having headaches so severe they were making him throw up, an alarming amount of pain in his neck and back, and after speaking to the nurse, I knew it could be spinal meningitis and that after signing a waver because of the possibility of paralysis, he would be getting a spinal tap to reach a diagnosis.

I could not hold his hand. I could not tell him how much I loved him. He was over an hour away in a tiny quarantined room.

That’s when I vaguely remember hearing that there were only five days until Christmas. And suddenly it was like I was waking up from a coma. Like all I could see were bright lights. Everything else washed away.

All except my husband. And my children. And my King.

There was no more tinsel and no more lights. I didn’t care whether the cookies needed slivered almonds or chopped pecans. Or that the last row of lights on the tree had burnt out. All I cared about was whether or not my phone was going to ring and what was going to be on the other end.

All I wanted was for my husband to be OK. And I had no idea if he was actually going to be OK.

As the hours and days have worn on, with presents still unwrapped and many left to buy, it was natural to wonder if Christmas was going to be normal. But maybe–just maybe its not supposed to be.

Because Christmas was never about us. It was about the Savior who came to this earth as a baby to be born in a cold stable among donkey and sheep. And just like the drummer boy–we have no gifts fit for a King.

Except to get down on our knees and thank him for our family.

And thank him for the night he came into this world beneath a midnight sky. Although there was no room in the inn, and although the world He came to save would betray him, He still came.

To bring us tidings of comfort and joy.

I have since learned that our prayers have been answered and Noah was not contagious. Test results have begun coming in and the worst illnesses are slowly being ruled out. Which meant that I was able to visit him! Holding his hand and seeing the color in his cheeks and the smile on his face was all the Christmas present I needed.

We are so thankful for all the prayers and all the love that has poured in from friends and family. It’s going to be a very merry Christmas this year, despite the fact that the thanksgiving decorations are still up and we don’t have a stocking for Caleb 🙂

Wishing you a Merry Christmas and a joyous time celebrating the birth of our Lord!
From my family to yours.