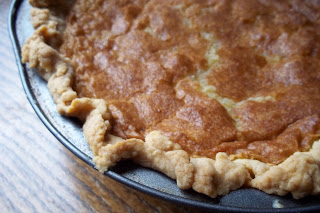 I know that’s a picture of pie, but my jar of butter didn’t turn out to be so photogenic so the pie took center stage. But there will be pie in this post. Buttermilk pie…allow me to elaborate.

There is a handy blog out there by the “West Ladies” that I enjoy perusing for homesteading ideas and tips. They’ve also put together a wonderful collection of DVD’s for everything from The Art of Soapmaking to The Art of Canning and I’ve been wanting to make their recipe for “Grandma’s Buttermilk Pie” which not only calls for a cup of buttermilk, but also offers a super simple method for making butter. Yum! So here we go….

I used a quart size canning jar but you could use any large jar that has a tightly sealing lid. The kids were eager to help and when my husband (aka the worlds best cream shaker) saw what we were doing, he jumped in to try it. But the jar got really full, making it difficult to shake. We realized that the cream was just thickening and expanding into a runny version of coolwhip Something wasn’t right. It was then that I remembered the one important rule–the cream needs to be at room temp. Oops. The recipe has ONE ingredient and I still managed to screw it up! Our jar was cool to the touch but after running it under some warm water for a few seconds, the fat instantly separated from the liquid and we suddenly had a large mound of butter!

I think the heavens might have parted at that moment, but maybe that was just me overly excited.

But then my husband (let’s just call him Noah from here on out) got a call. Our neighbor down the street needed help beheading a turkey. Talk about random–and a little gruesome–my apologies. It was actually pretty ironic. I wondered how many wives and husbands didn’t have that conversation this week. “As much fun as I’m having churning butter little lady, duty calls.”

So turkey-killer and I parted ways and I set to work draining off the buttermilk. After reading that too much liquid left in the butter can ruin it, I was nervous about not being able to get it all out and probably only got a B+ so next time I will strain it really well through cheesecloth. But for now, we were thrilled. Especially my husband. We stood in our kitchen after the kids went to bed, spreading homemade butter on last nights biscuits, dolloped with spoonfulls of some pie filling I had made the week before–rhubarb, strawberries and butter never tasted so good! We leaned against the kitchen sink, devouring our late night snack as he filled me in on the details of his–er–own adventure across the street. When he finished, I told him I was going to do some canning with Mrs. Turkey-killer after church (hi Robyn :])

He started laughing and said, “We’re such rednecks.”

I think something about me being barefoot and pregnant in the kitchen rounded out the moment 😀
Happy Homesteading.

P.S. Buttermilk Pie…two thumbs up! Please don’t make fun of my crust, I worked very hard, haha. And I used an AMAZING recipe by Ina Garten from the food network.
Also, visit Homestead-blessings.com for the recipes and much more.